Leading (rhymes with "wedding") is the distance from one line of text to the next line; its name reflects the fact that typographers used to alter the line spacing by putting strips of lead between lines. Today, it's found as the "line spacing" option in the "Paragraph" formatting menu of Word: 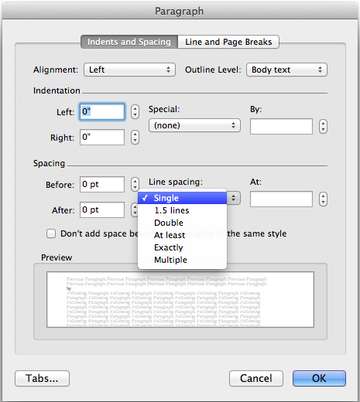 In the old days of typewriters, line spacing was always 6 lines per inch, or 12 points per line. Thus, your only real options were to use 12 points per line or (by inserting a carriage return between each line) 24 points per line. Double-spacing — 24 points per line or 3 lines per inch — became the norm in much writing, in particular legal writing.With Word, you have many more options. For starters, current versions of Word have four main default settings: 1.0-spacing, 1.15-spacing, 1.5-spacing, and 2.0-spacing. Don't be fooled by the incredibly misleading names. Word has leading "built-in" to fonts — usually between 110% and 135%. Times New Roman has 115% leading.

The "Exactly" setting, at first, seems pretty straightforward. If you want 2 points of space between each line of 12-point text, set "Exactly" to 14 points. If you're going to have variations in the text such that you want a line-spacing of 14 points while allowing Word to make it bigger if necessary, select "At least" 14 points.

Well, not so much. Word goes and complicates things. Here are two text samples. The first is set to 1.5 lines (which is 20.7 points per line). The other is set to Exactly 20.7. See if you can tell the difference:

Yes, Microsoft in its infinite wisdom has different algorithms for how it spaces a given number of points per line, depending on whether you select "Exactly" or "Multiple."

In a "multiple" setting (where the multiple is at least 1.0), the leading is based on "single-spaced" text. In single-spaced Times New Roman, the text is roughly 11 points high, and roughly 14 points of line-spacing are used. (The numbers are actually closer to 10.9 and 13.8, but I'll round for the sake of simplicity.)

To create a line spaced in a "multiple" setting, Word creates a line 14 points tall, from the bottom of the lowest descender upwards. All of the remaining space is placed after the line. Thus, in the 1.5-lines setting, this is what you get:

Except for the 3 points at the top, which is held constant, all of the white space between lines is below the text. (This gets a little more complicated at sizes below 1.0 lines. When you go below 1.0 spacing, Word figures out how much space it needs to chop off and chops 80% from the top and 20% from the bottom, which means the descenders will get "clipped" on the screen. More on this below.) 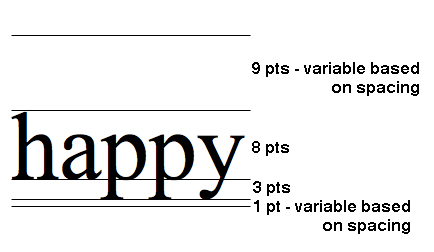 Finally, the math involved also means that at any "exactly" setting less than 15, Word is going to "clip" the bottom of the descenders.

This clipping only changes how the text appears in Word — i.e. it should print to PDF or paper correctly — but it is annoying nonetheless.

As if to make your life that much more annoying, different fonts have different amount of built-in leading. So, if your local court rules require "double-spaced text," and they're assuming you're using Times New Roman, what the court really wants is about 23.5 lines per page. And if you use a font other than Times New Roman, you may get too many lines per page (which the court won't like) or too few lines per page (which you won't like). For you convenience, here's a handy reference for what figure to put in the "Multiple" setting to achieve "double-spaced" text.